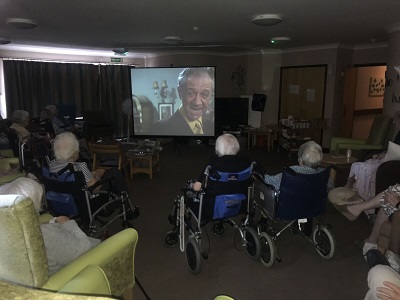 The special screening of ‘Carry On Girls’ from the popular series of Carry On films, which were produced in the 1950s, 1960s and 1970s, was shown in a special screening at Olive House residential home in Newton Flotman, Norfolk, in honour of a resident who featured in three of the films.

As a former dancer, performer and actress, Anne Loxam was delighted to see the film once again and share in the slapstick comedy with friends and staff at the home. In this particular film, Ann is seen as a ‘saboteur’ adding a whole box of itching powder into the bathing costumes worn as part of a beauty parade, and features alongside Sid James, Barbara Windsor and June Whitfield.

Dave Land, a relative of one of Olive House’s residents kindly donated his time, skills to set up a large screen and projector for the special screening event.  Staff organised refreshments for all, including ginger beer, shandy, lemonade and, of course, plenty of popcorn for all.

Kerry Gooda, Manager at Olive House said: “We knew Anne had performed in several films and it was lovely to create the special cinema screening to show the film to all.  I think everyone can recall at least one of the Carry On films from the series and it was a great evening of enjoyment and reminiscing.   While dancing was Anne’s real passion, she was delighted to share in her memories of acting in the well-known shows.

“I would like to thank the team for making the showing possible, with particular thanks to Dave Land for his efforts.  Everyone really enjoyed themselves.”