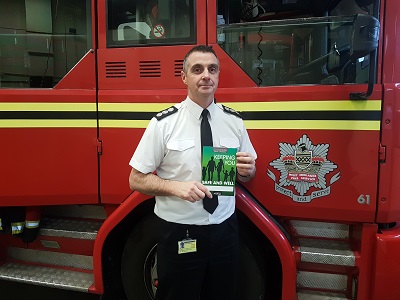 People over the age of 65 “are most likely to die or be injured in a house fire” according to the Station Commander of a Birmingham fire station who has joined forces with Ageing Better in Birmingham to help keep the most vulnerable people in the city safe.

Latest figures show that during a three-year period between 2013 and 2016 there were 2,270 accidental dwelling fires in the Birmingham area. Of these, 17 per cent involved people over 65. More than 50 per cent of the fires took place in the kitchen and were caused by cooking being left unattended or people getting distracted.

Adrian Whitehouse, station commander at Hay Mills Fire Station and member of the Birmingham Prevention Team, said: “The question is not necessarily that they are the risk but that the over 65’s are most likely to die or be injured in fire due to mobility or living alone, stemming from the cooking being left unattended or that person being distracted.”

In a preventative measure West Midlands Fire Service has teamed up with Ageing Better in Birmingham, a “life changing” scheme which runs across the city to tackle isolation in the over 50s, to help deliver the fire safety message to the most vulnerable in society.

Adrian added: “Ideally we wish to target the most vulnerable in our community as they are most likely to die in fire due to health, mobility and living alone.

“Vulnerability covers such a wide variety of aspects including those with mental health issues such as hoarding and dementia, those receiving benefits and those suffering financially and leading a disorganised life. Many of the issues identified by Ageing Better in Birmingham, such as loneliness and isolation, are a precursor to the vulnerabilities putting people over 65 at risk.”

So far 4,700 people have benefited from the Ageing Better in Birmingham programme, which was launched in April 2015 and delivered by an Ageing Better Partnership, led by Birmingham Voluntary Service Council.

People who attend community events, clubs and activities supported by Ageing Better in Birmingham, have been invited to take up the West Midlands Fire Service offer of a free Safe and Well Check.

The scheme involves firefighters visiting people in their homes to give advice about the use of electrical items in the kitchen, establishing an escape plan and night time routines. Smoke alarms can be fitted and special devices can be supplied for the hearing impaired. Fire retardant bedding and throws can also be supplied from those at risk through smoking.

Stephen Raybould, Ageing Better in Birmingham Programme Director, said: “We know that the process or fact of being isolated from family and friends can not only contribute to anxiety but can also endanger life. People should be happy in older age and be enjoying their retirement, but as these latest figures show too many people in our society are facing this period living in isolation. We are delighted to be working with the West Midlands Fire Service to help deliver the fire safety message as part of our grass-roots approach to empower and connect individuals. We are committed to helping to create sustainable change in communities.”

For information about programmes taking place near you, email: ageingbetter@bvsc.org or call 0121 678 8876.