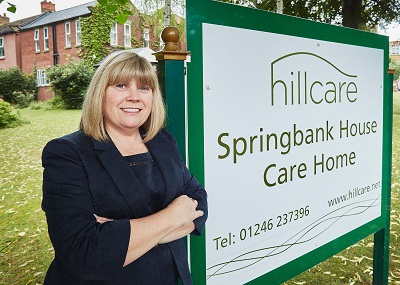 The managing director of the Hill Care Group joins other nominees who have made an outstanding contribution to business in the Yorkshire and Humber region.

Wendy has been the head of Hill Care, which has its headquarters in Chesterfield and homes across the North, since 2006.

She has overseen the company’s growth from two homes to 38 with almost 2,000 beds, generating a turnover of over £50m, doubling in size in the last year alone.

She said: “While Hill Care’s growth was directly achieved through single home and group acquisitions, central to our success was creating a corporate culture and belief set focused on respect, responsibility and support.

“I want to ensure expansion does not come at the cost of our core values and that everyone understands they are here for one reason: the care of those they have the privilege to look after.”

Outside of her business achievements, Wendy has raised thousands of pounds for charity and inspired Hill Care staff to join in her fundraising campaigns.

In July 2017, she took part in a 345-mile cycle ride from London to Paris to raise funds for the Alzheimer’s Society.

At the time, Hill Care had 25 homes that all ran associated fundraising activities, helping to generate £10,000 – far exceeding Wendy’s original target of £1,500.

She said: “Cycling the London to Paris ride has got to be my biggest and best ever personal achievement.

“And, actually, it wasn’t the ride itself that I am proud of. I am most proud of how I inspired the whole company to join together to raise awareness, money and education for charity.”

The Barclays Yorkshire Women in Business Awards 2018 concludes with a glittering awards ceremony on 21st June, at Bowcliffe Hall, near Leeds.

Covid-19 vaccine- it’s only a little needle, nothing to worry about, say care home resident