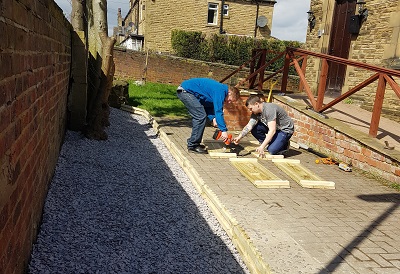 Care provider Heathcotes Group has unearthed a new talent at its Kirklands service in Leeds, where one of the service users volunteered to take on a landscaping project and proved to have skill and imagination in spades!

The attractive grounds at Kirklands are fantastic for enjoying the summer months, but a small section behind the bin storage area was starting to look in need of a makeover. Team Leader Rob Garton and service user LB approached Service Manager Ricky Farnill with an idea to resolve the problem. Ricky liked their suggestion, so Rob and LB came up with diagrams and prices to illustrate what they had in mind and their project plans received the green light.

It’s a job that would usually be covered by Heathcotes’ dedicated maintenance service, but on this occasion the team discussed the possibility of LB having a go at the work with Rob’s help. Everyone agreed it would be an excellent idea, paving the way for Heathcotes’ own DIY SOS to spring into action.

Ricky was delighted with their efforts:

“Over a two day period, LB and Rob were hard at work – laying concrete, levelling the ground, putting a slate bed down and making some homemade flower beds. The end result is very impressive. I became the delegated cup of tea maker for the whole operation! It showed to me how much the staff and service users care about where they work and live, and the pride they take in it. It was great to see staff and service users working together, and to see them looking at the finished results with smiles on their faces. Rob and LB have future plans to make a vegetable patch around the back of the home with the material they removed.”

Kirklands is a specialist residential service for adults with learning disabilities, mental illness, dual diagnoses and associated complex needs. It is one of 60 adult services which Heathcotes Group provides on a nationwide basis.