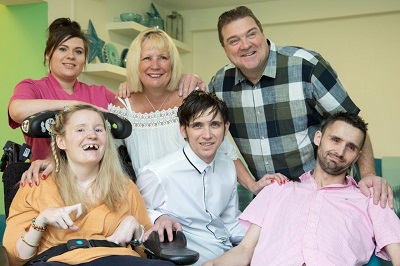 A brave mum whose three grown-up children all have a degenerative brain condition has joined forces with a care organisation to launch a new awareness campaign.

Kim James, from Llay, near Wrexham, made an emotional plea for more research into Huntingdon’s Disease amid renewed hope of a cure for the cruel hereditary illness.

She is a regular visitor to Pendine Park’s Penybryn Care Home in Wrexham where son Christopher Bennett, 36, and daughter Elizabeth, 29, are both residents.

Her other son, Jonathan, 31, also has the condition but is still able to live independently for the time being.

Kim and her husband, Ian, who is stepfather to the siblings, are working with Pendine Park to raise awareness of Huntington’s disease which they describe as Parkinson’s, Motor Neurone Disease and Alzheimer’s all rolled into one devastating condition.

She said: “It’s very rare to have three siblings develop Huntington’s disease and even rarer that all three developed Juvenile Huntington’s in that they were so young when they were diagnosed.

“Having Christopher and Lizzie together in Penybryn, which specialises in brain injury and neurological conditions, is a Godsend. Until February I was Lizzie’s full time carer but she has settled in Penybryn very quickly.

“Christopher has been here four years now and to have him settled is wonderful. It’s the first place he has actually been able to settle.

“Pendine Park is amazing in as much as it isn’t just the resident that is supported, the whole family is given all the help and support they need. And the staff are interested and prepared to listen to suggestions.

Penybryn manager Tracey Cuthill revealed she and her staff care for a total six residents who suffer from Huntington’s disease including Christopher and Lizzie.

She said: “There is no doubt Huntington’s is a terrible disease. It’s vital we raise awareness of the disease and how it manifests itself in those that suffer from it.

“It’s wonderful that Kim, Ian and Jonathan have talked about their experiences so people can gain an understanding of this awful condition affects the central nervous system and brain.

“It causes involuntary muscle movement and changes in the brain that lead to emotional swings that can result in challenging behaviour and an inability to control emotions.”

“But she is still acutely aware of everything that is being said or done around her. In Christopher, Jonathan and Lizzie’s case it was their dad that carried the gene.”

Kim urged pregnant women to get themselves checked if they knew of anybody in their family who had the Huntingdon gene.

She said: “I would never want to put any child through what I have had to watch and endure my children have to go through and deal with.

”If a woman gets pregnant with a HD background she can have the foetus tested for the HD gene, then she has a dramatic decision to make.

Ian added: “Christopher showed the first signs he might have the disease when he was 18. He had counselling and blood tests and that confirmed he had the disease. He went off the rails in truth and began drinking heavily

“Lizzie developed Huntington’s next when she was 16. It began with depression and hiding in the toilets at school.

“Her physical problems came on very rapidly and now she can’t walk, talk and is peg fed through her tummy as she can’t swallow. She can still say the odd word but it’s getting worse.”

According to Jonathan, he was around 27 or 28 when the symptoms started showing themselves.

He said: “It’s easier for me in a way as I can look at Chris and Lizzie and see what they have gone through.

“I want to go on living independently as long as I can and do what I can to raise money for the Huntington’s Disease Association. But, more importantly, I want to raise awareness of the condition.

“I’ve completed the Manchester, Chester, Conwy marathons, several times in fact, and a rock night I organised at Llay British Legion a few weeks ago raised more than £2,000. If people don’t know about the condition the things won’t change.

“It’s a terrible, terrible illness and I know what is going to happen to me as it’s happened to my brother and sister. I know what’s coming but have grown to accept it.”

Di Lyes and Alwena Potter are Huntington’s Disease specialist advisors and have worked with the family for many years.

Di said: “I’ve worked with Christopher for a long. Long time. I first got to know him when he was just 18 and he’s now 37.

“This was a handsome young man that wanted to go to university. He always had a girl on his arm and just wanted a relationship, get married, have a career and have his own family.

“He has had to watch his friends do all these things and that has led to anger and frustration. Who could blame him? He knew from the outset what the disease was going to do to him.

“I cover a large area and am just moving to cover a different area so Alwena is taking over my clients including Christopher, Lizzie and Jonathan.

“I want to see awareness of the disease increase so pub landlords, supermarket workers, police officers and other professionals understand the disease and how it can manifest itself in behaviours and someone’s physical appearance.”

She added: “We have around 20 people living with Huntington’s disease in Wrexham and around 10 in Flintshire but there are many more that are at risk.

“Pendine Park is amazing. It’s wonderful that staff are willing to campaign and raise awareness of Huntington’s disease and the problems families and sufferers face.

“The staff at Pendine Park are happy to undergo training and to get a better understanding of what Huntington’s Disease is and what it does to people.

To find out more about Huntington’s Disease go to www.hda.org.uk