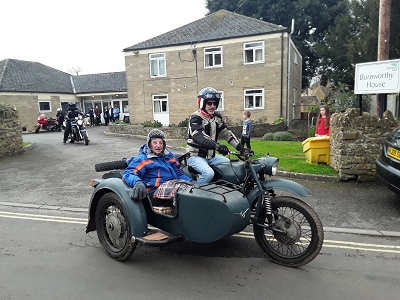 Burnworthy House in South Petherton recently organise a special surprise for one of their residents, Bill Ambrose.

Great grandfather and Founder Member of the Ilminster Lions, Bill is an avid biker and spent his younger years biking across Europe with his wife. After discovering a photograph album with images of Bill and his bikes, Claire Hickey, who works at Burnworthy House, set to work arranging a special surprise. She contacted Bob Cooper of Langport Bike Night group and asked if he would be able to assist with getting Bill back on the road.

Joined by his family, Bill was greeted by a motorbike and sidecar, and couldn’t believe his ears when he heard that he would be going for a ride. With a bike escort of Bill’s son in front and biker friend, Colin, riding behind, Bill was safely smiling away in the sidecar as Bob Cooper took to the road. 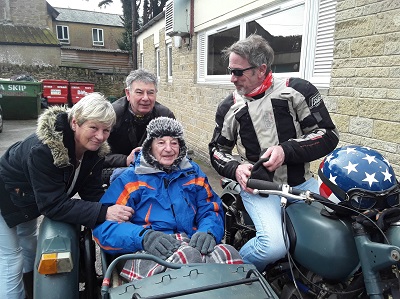 There wasn’t a dry eye in the house as Bill set off and arrived back. His daughter, Rachel was there to witness the magical moment that had been organised for her father: “We’re overwhelmed, as was dad. His face lit up; he thoroughly enjoyed it. It made his day and we are all so incredibly grateful. We can’t thank Burnworthy House, Bob Cooper and the bike club enough for what they have done for dad.”

Jaine Thorne, Activities Co-ordinator at Burnworthy House said: “It was a magical moment for everyone. The morning was very emotional and will be a wonderful memory for Bill and his family.”