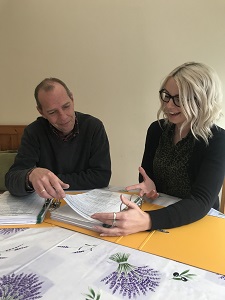 A woman who gave up a job as a beautician to pursue a career in the care sector has been named Learner of the Year through an apprenticeship scheme funded by the Welsh government.

Amyleigh Normanton started work as a support worker for the Regard Group in 2008 and has since obtained four QCF diplomas in adult health and social care through the organisation Progression Training.

She is now manager of Garthowen residential care home in Rhydowen, near Llandysul in Ceredigion, which supports people with learning disabilities, mental health and complex needs.

“I was a trained beauty therapist and had just started training as a hairdresser, but three months in I realised that I had had enough. It was just the same old, same old every day,” said Amyleigh, aged 27.

“I applied to be a support worker at a Regard service in North West Wales because needed a job basically. But, once I was there I found I absolutely loved it and realised I’d found my calling.

“It’s so rewarding. No two days are the same. Knowing you’re making a difference and giving people the best quality of life possible gives me a real sense of achievement that would be hard to experience anywhere else.”

Since taking over as manager at Garthowen last August, Amyleigh has implemented an activity system to make sure individuals at the service are actively involved in the community.

She has increased the number of daily in-house activities including baking, and crafts and weekly karaoke and discos.

One person now attends a local knitting club, others attend chair aerobics and there are also walking sessions and holidays to increase community inclusion.

“It’s all about having a good care plan in place and a motivated staff team that shares both my own and Regard’s vision and values,” added Amyleigh.

Amyleigh, who travels 62-miles each day to Garthowen from her home in Dolgellau, obtained her care qualifications through Progression Training as part of a work-based learning scheme.

The scheme, funded by the Welsh government and the European Social Fund, involves monthly work-based sessions with an assessor from Progression Training.

“I’m really lucky as I would never have been able to get these qualifications any other way because I needed to work,” added Amyleigh, who has an eight year old son on the autistic spectrum.

“Regard has been really supportive throughout my training. They are a fantastic organisation to work for, and I’m really lucky to have inspiring managers whose knowledge is outstanding.”

Progressive Training provides QCF training for the Regard Group’s care services across Wales.

“Amyleigh is a good example of what an apprentice can achieve”, said Sara Davies who was Amyleigh’s assessor at Progressive Training. “Regard is very lucky to have such a fantastic staff member and it’s great to see an employer encourage and support staff development.”