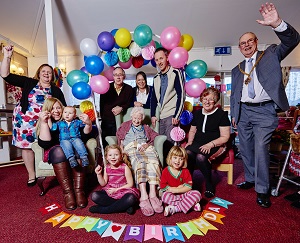 A popular resident of a Worcester care home has celebrated her 105th birthday.

Stella Price was surrounded by family and friends for her special day and received a visit from the Mayor of Worcester, Councillor Steve Mackay, at the city’s Northwick Grange Care Home.

Stella, who has lived at the Old Northwick Lane home since 2014, is one of only 14,500 people in the UK who are currently over the grand age of 100 years old.

When she was born in North Piddle in 1913, King George V was on the throne and, significantly, Britain was just over 12 months away from the First World War. The FA Cup Final that year was held at London’s Crystal Palace with Aston Villa defeating Sunderland one nil.

The former post lady and mother of twins Ron and Margaret, has four grandchildren and three great grandchildren, the youngest being only 18 months.

Jackie Houghton, manager at Northwick Grange Care Home, said: “We had a super day celebrating Stella’s birthday and it was made all the more special by a visit from the Mayor and Mayoress who were both really keen to meet Stella.

“Stella is a wonderful and hugely popular resident here at the care home. We were delighted to play such a big role in helping her and her family mark such a magnificent milestone.