Residents at a Winchester dementia care home have enjoyed a welcome taste of this week’s snow without having to brave the cold.

Carers at Colten Care’s St Catherines View went out and gathered snow from the garden and brought a load in so residents could build a mini-snowman and even throw a few snowballs around in the lounge.

Resident Maggie Ireland was lead architect of the snowman, dubbed Frank, adorning him with a scarf of woolly socks, the traditional buttons for eyes, a carrot for the nose, and a pair of brushes for the arms.

Companionship Team Leader Codey Hickman said: “Some of the residents said they were desperate to build a snowman. It really was too cold for them to go outside so we brought the snow in for them. Everyone thought it was a great idea. 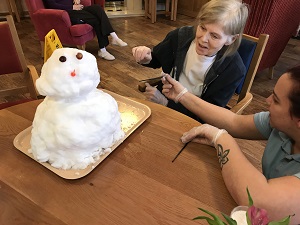 “Frank was just the first name that popped into our heads. As well as making him, the residents had a gentle game of snowball ‘catch’ in the lounge.

“I also volunteered to stand in the garden so they could throw snowballs at me directly from the warmth of the home.”