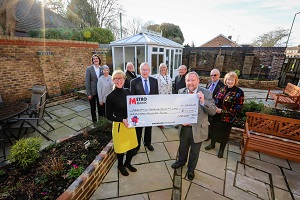 The society, part of the international Abbeyfield network, runs the Cornwall House residential home and the Old School House supported living in the village of Ferring, near Worthing, as well as supporting older people in their own homes.

The donation – from surplus money held by the trust after all creditors had been paid in full – is funding a new kitchen and revamped garden area at Old School House.

Not-for-profit Abbeyfield Ferring was chosen to receive the windfall because it is based in Sussex, the county where Careways’ own residential home was based, and operates in a similar field.

Careways Trust Ltd (then Crossways Trust) was established as a charity in 1949 by 22 member benevolent funds to provide auxiliary care and accommodation for their elderly or infirm beneficiaries.

The trust thrived for 60 years, but by 2009 its financial performance became a cause for concern due to increased care home regulations and costs, member funds closing their own homes and pension fund deficits.

Without appropriate corrective action the trust would, over a period, most likely have become insolvent.

Careways Trust chairman Ray Flanigan said: “There had been many attempts to turn things around, but it was a real struggle for the trustees to try to run a business on a voluntary basis and still keep an eye on the trust’s charitable aims.

“We reluctantly decided – on advice – that the trust had run its course. If we had tried to go on much longer the capital would have been eaten up, with nothing left for the charities we’ve now been able to support.”

Careways then entered into Members Voluntary Liquidation, with the unanimous agreement of its member funds.

Abbeyfield Ferring chief operating officer Jacqui Swindells said: “We are delighted to receive such a large donation which will enable us to continue our work to help people live independent lives with help available when needed.

“This wonderful amount of money is being used to completely refurbish the kitchen at Old School House, supported accommodation complex in Ferring, as well as redesigning, extending and improving the garden.

“Old School House is a halfway house between one’s own home and a care home. Our 11 residents live independently in self-contained flatlets, but come together for meals and social gatherings and we have staff on site 12 hours a day.”

The not-for-profit registered Abbeyfield Ferring Society was founded in 1980 by the late Bill Cornwell and his wife Joan to provide high standards of help at home, supported living and residential care for the older residents of Ferring and surrounding area.

It is a member of the Abbeyfield Society, a national and international network of high quality care services and care homes with more than 9,500 people in 720 houses worldwide.

A second donation, of £400,000, was given by Careways Trust to Dementia UK and will fund 16 new Admiral Nurses.